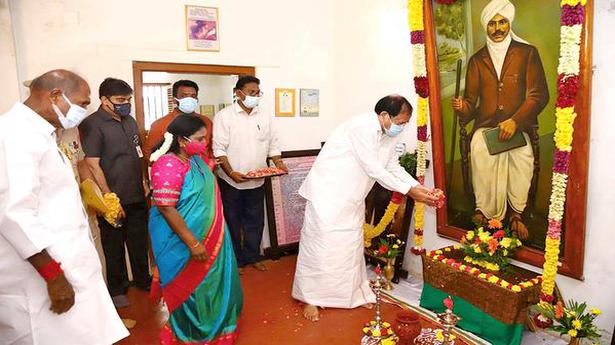 
Vice-President M. Venkaiah Naidu on Sunday paid floral tributes to Mahakavi Subramania Bharati to mark the death centenary of the poet and freedom fighter at his memorial home in the city.

Mr. Naidu, on his arrival on a three-day visit, first went from the airport to the Mahakavi Subramania Bharathiar Memorial Museum-cum-Research Centre and paid floral tributes to the portrait of the poet.

Earlier, he was greeted at the airport by the Lt. Governor, the Chief Minister, the Speaker and other Ministers.

Mr. Naidu drove to the memorial museum established by the Puducherry government at Bharati’s residence, where the revolutionary poet stayed during his over 11-year association with the city during the freedom movement.

Mr. Naidu will formally open the Puducherry Technological University and also inaugurate a solar power plant at the Pondicherry Central University on Monday.