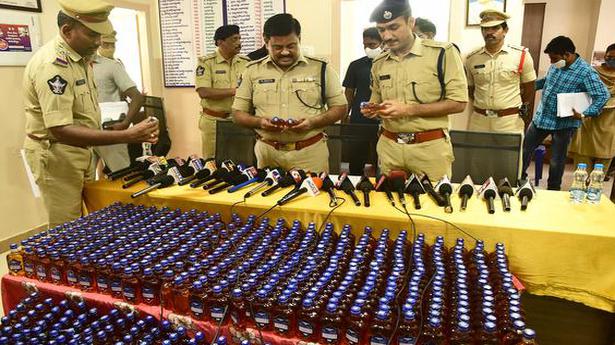 
The Special Enforcement Bureau (SEB), Police and the Prohibition and Excise (P&E) department personnel have stepped up vigil on the borders to check flow of liquor into the State during the third phase of gram panchayat elections.

As part of which, vehicle checking was being done at all the 52 checkposts on A.P.-Telangana borders and the SEB officials bound over 9,000 excise offenders, ID liquor and arrack manufacturers, said Krishna district Superintendent of Police(SP) M. Ravindranath Babu.

Police also seized about 15,000 liquor bottles and huge quantity of ID liquor so far. The teams destroyed thousands of litres of fermented jaggery wash at Pedana, Avanigadda, Nandigama, Jaggaiahpeta, Mylavaram, Vissannapeta and other mandals, he said.

West Godavari district SP K. Narayan Naik said that joint raids were being conducted at the checkposts on AP-Telangana borders.

“The SEB sleuths and the police seized about 10,000 liquor bottles on the borders during the second phase of local body elections. The raids will continue,” the SP said.