Residents of some villages have taken objection to the State government’s plans to form residential layouts in villages surrounding Belagavi city, saying that they would lose their fertile land.

They said that the Belagavi Urban Development Authority was making efforts to acquire land in 28 villages for creating layouts.

This issue was raised in the taluk panchayat meeting here on Tuesday. Some members said that gram panchayats in all the 28 villages had received notice about land acquisition for construction of residential layouts for urban residents.

Taluk panchayat president Shankargouda Patil said that a resolution would be passed against this and sent to the State government.

However, BUDA officials refuted this. “No notice has been sent for formation of layouts. There is a proposal before the State government to expand the jurisdiction of BUDA. That is yet to be approved,” a senior BUDA officer said. “There is no plan or proposal for acquiring land for residential layouts in any of the new areas, as of now,” BUDA Commissioner Preetam Naslapure said.

BUDA, one of the biggest city development authorities in the State, has a spread of over 192 square kilometres. It stretches from villages such as Kakati and Kangrali on one side and Savgaon, Mandolli and Peeranwadi on the other.

When expanded, it will encompass the Belagavi airport in Sambra, Yallur, Navage and Kadoli on the four sides. The proposal has been forwarded by the district administration to the State government.

Once the new areas are included, then the rules set by BUDA on land use and house construction will have to be followed. Regulations on creating new layouts and residential and commercial complexes will also have to be adhered to. A vision document is being prepared, along with a comprehensive development plan. A detailed plan of the city will be prepared using Geographical Information Systems, under the Centrally aided AMRUT Scheme.

BUDA’s plans for layout development under the farmers partnership scheme is also being opposed.

The urban body plans to take over farm land from those willing to sell, develop it into layouts and offer half of the number of sites developed to farmers so that they can sell them to whoever they want. BUDA will, however, allocate its sites to those who apply for them, under government rates.

It has an on-going project on Kanabaragi Road that was challenged in court earlier. It has been cleared now and BUDA will develop the layout in 140 acres, excluding the 160 acres that is under dispute.

Similar plans are afoot in Jhadshahapur, Hindalga and Anagol villages. A few days ago, residents of Anagol and Halaga villages submitted a memorandum to the Deputy Commissioner’s office urging the government to drop the idea of creating residential layouts in these villages under farmers partnership scheme. Deputy Commissioner M.G. Hiremath has assured them of looking into their concerns. 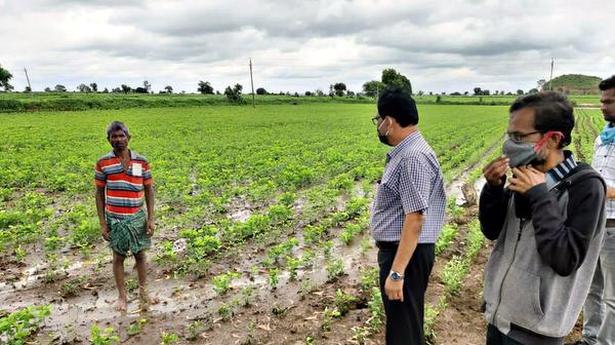