At least four workers of a Bharatiya Janata Party (BJP) candidate in the Singhat Assembly constituency in Churachandpur district were injured in a murderous attack at 7.30 p.m. on Wednesday near the international border. The unidentified attackers, numbering over 50 and armed with batons and other lethal weapons, managed to escape under cover of darkness. Police said no arrest has been made so far.

Police sources said that supporters of G.S. Haopu, the BJP candidate for the Singhat Assembly constituency for the by-polls to be held on November 7, were returning after visiting some villages. When they were nearing Behang village, some unidentified persons first pelted a cavalcade of vehicles with rocks, causing extensive damage. Four workers were beaten up by the unidentified persons. Some other workers sustained minor injuries, which hospital sources said were not life-threatening. Police said that additional forces were rushed to maintain land order.

A few days ago, there were clashes during which tear gas shells were deployed and live bullets were fired into the air to disperse a mob in the Wangoi Assembly constituency in the Imphal west district, which also goes to by-polls on November 7.

People accused the BJP candidate, Oinma Lukhoi, who is a Minister but not currently an MLA, of opening fire. There were vehement denials from some women activists loyal to the BJP candidate. They said that some supporters of other candidates might have fired and tied to blame the BJP candidate. On Wednesday, some women reminded Mr. Lukhoi’s supporters that the party spokesperson, Y. Nilamani, had said during a news discussion in a local TV channel, “The Minister had to fire from his licensed gun in self defence.” It was pointed out that there were corroborative reports in the local media about this incident, which took place at Iram Siphai.

There have also been reports of pre-election violence in the Muslim-dominated Lilong Assembly constituency. Though the Lilong MLA, Abdul Nasir of the Congress party, had resigned, the BJP has not nominated him. In protest, people in Lilong came out to the streets and they said that if a BJP candidate was not announced soon, they would boycott the by-polls in the constituency. 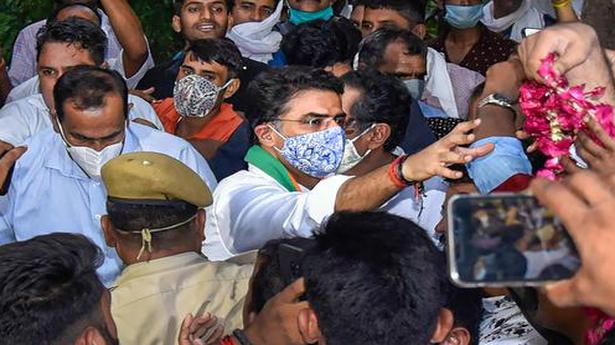 Congress-RJD will win Bihar polls, will go there for campaigning: Sachin Pilot

Chief Minister Pinarayi Vijayan has flagged the unhealthy practice of victimising people who have been quarantined in the district. During