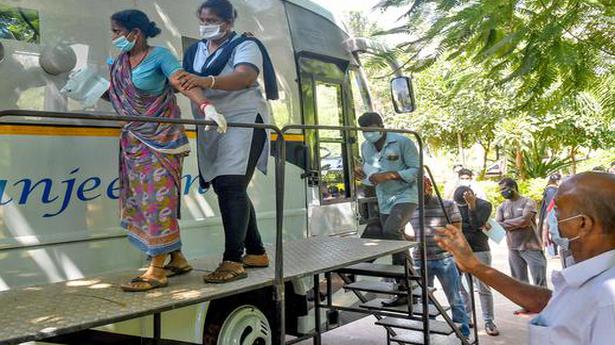 The district of Visakhapatnam has won plaudits from the British Medical Journal (BMJ) in its recently published paper ‘Combating the COVID-19 pandemic in a resource-constrained setting: Insights from initial response in India’.

In the paper, the journal appreciates the work done by the district administration in fighting the pandemic through ‘convergence in an urban setting’.

Several countries were selected for the study and India was a natural choice.

The paper appreciated the innovative approaches taken by the district administration in converging resources and manpower from multiple departments to form an effective task force to fight the pandemic.

Visakhapatnam had always been in focus, as it has the largest urban area in the State with multiple factors such as industries, port, railways, and an airport, as well as its urban population of over 2.5 million that could spur the spread of the virus.

But it did better and even as on date, it is in ninth place among the 13 districts in the State with a caseload of around 57,900, lower than districts such as Anantapur, Chittoor, East and West Godavari, Guntur, Kurnool, Nellore and Prakasam.

“Ever since the first case was detected in the last week of March, our count has been below 20 till the last week of May. It started to grow only after the Unlock process began in the middle of June. But that spike was expected to come with the process of removing the lockdown,” said Mr. Vinay Chand.

The factor projected in the BMJ paper and data given by ICMR, Visakhapatnam was appreciated for its innovative convergence methods in the initial days in a resource-constrained setting.

Speaking about the convergence methods, the Collector said, “Initially we were constrained from all sides. We did not have the required beds with oxygen supply or ventilators, PPE kits, oxygen supply, sanitisers, manpower in the medical field or hospitals to take care of COVID patients. But what worked well for us is the setting up of specific committees to handle respective tasks.”

The district administration constituted 22 committees such as an isolation committee, cluster containment committee and testing committee.

“Each committee comprised experts from various fields and their tasks were clearly cut out. The isolation that took care of hospitals treating COVID patients had senior pulmonolgists, district officers, doctors from DMHO and a Joint Collector heading it. Similarly, the cluster management committee had epidemiologists, doctors from community medicine, resources from the civic body and police to form the committee. It was teamwork that saw us through in the initial days, despite being constrained on all fronts,” he said.

“The good work done in the initial days is paying dividends now. Today, the infection rate has dropped from 20% to 1% and we have over 6,000 beds with oxygen supply and ventilators, over 20 hospitals, sufficient PPEs, and we are prepared for the worst,” said Mr Vinay Chand.

Three missing, one drowns while fishing in Krishna river Get-well wishes pour in for SPB