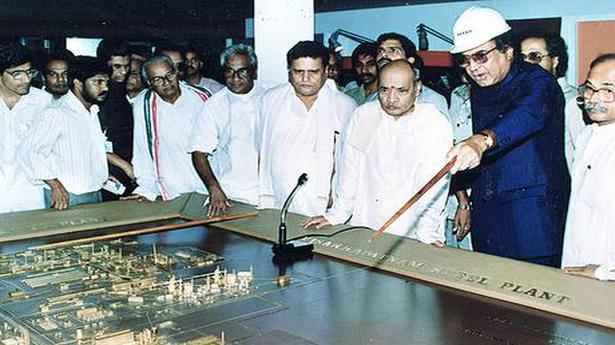 Visakhapatnam Steel Plant (VSP) has a long saga of struggle and sacrifices. It was a people’s movement in then combined Andhra Pradesh, in which students from Andhra Medical College, Andhra University, Ms. AVN College and many other colleges from Guntur, Krishna, Warangal and East Godavari districts, had participated. They were led by stalwarts such as Tenneti Viswanadham, Gouthu Latchanna, Puchalapalli Sundarayya, Chandra Rajeswara Rao, Nallamalla Giriprasad Rao, T. Nagi Reddy and Vavilala Gopalakrishnaiah.

The movement for a shore-based steel plant in Visakhapatnam began with C. Subramaniam announcing that a steel plant would be set up in the city in 1963. In 1965, the Centre asked the Anglo American Consortium to indetify a suitable location . A report was tabled in Parliament on July 3, 1965, citing Visakhapatnam as a feasible location. On July 1, 1966, the State Assembly, then led by Chief Minister Kasu Brahmananda Reddy, unanimously passed a resolution favouring the plant in Visakhapatnam.

But, the project went into a limbo thereafter. It again gained momentum, when Amruta Rao from Guntur, sat on an indefinite fast at the District Collector’s office, on October 15, 1966. “For about three days, nobody noticed Mr. Amruta Rao. There was a small report about his fast in a local Telugu newspaper. We learnt from him the relevance of the plant ,” recalls Kolla Rajmohan, who was then the general secretary of students union of Andhra Medical College.

On October 22, the students held a public meeting and took out a rally. Two days later, an all-party committee was formed to champion the cause, followed by an independent strike and ‘hartal’ called by students. “On October 29, 1966, we organised a ‘rail roko’ and the Calcutta-Madras Mail was held for hours at Gopalapatnam. We received spontaneous support from all colleges across the State and it was followed by a general strike on October 30,” recalls Dr. Rajmohan.

November 1 was the day, when the history of the VSP was written in blood. In an effort to quell the agitation, the police opened fire on the protesters near the Old Post Office in the Old Town area, killing 12 people. “All the bullet wounds of the deceased were on their chests.More than 100 protesters suffered bullet and lathi injuries,” says Ch. Narasinga Rao, State secretary of the Centre of Indian Trade Unions (CITU).

Within the next few days, 20 more protesters were killed, including five in Vijaywada and five in Guntur, two in Vizianagaram, one in Kakinada, one in Warangal, one in Rajahmundry, one in Sileru, one in Palasa, one in Jagtial and two in other areas.

This gave the agitation national and international recognition and it was only on April 10, the then Prime Minister Indira Gandhi announced in Parliament that a steel plant would be set up in Visakhapatnam. She also laid the foundation stone on January 20, 1971.

All the three Prime Ministers, in their speechs, had described the VSP as pride of the State, the city and the country.

The VSP had gone into production in 1991 and till 2000, it accumulated losses to the tune of about ₹4,000 crore. In 2,000, it was referred to the Board of Industrial and Financial Reconstruction (BIFR), but after much pressure, it was given a restructuring package of ₹1,333 crore.

Members of Steel Executive Association (SEA) says that the original estimate was ₹1,900 crore, but by the time it had gone into production and due to delay in construction of about 25 years, the cost had gone over ₹8,000 crore.

The government had given only ₹4,986 crore and the balance was raised by the VSP from the market. Between 2001 to 2016, the palnt earned profits and went into losses again from 2016, due to a number of factors.

The VSP has so far paid interest on loans of about ₹18,000 crore. It has accumulated losses of ₹12, 973 crore and profits of ₹18,069 crore. Heavy interest on loans and lack of captive mines have been the main reasons for its losses, says members of the SEA.

“If mines are given, the cost of raw material will drop by ₹4,000 to ₹5,000 per tonne and we can bounce back. This plant is emotionally rooted to the people and the Union government should revisit the proposal to privatise it,” they say. 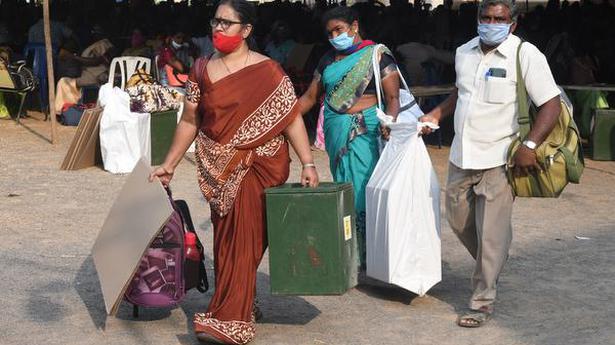 Polling for 2,723 panchayats in State today