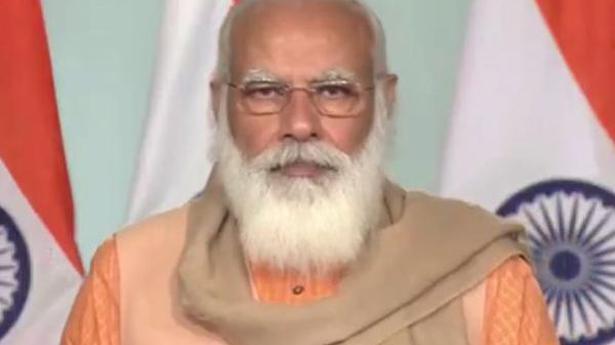 Prime Minister Narendra Modi asserted on February 11 that the BJP does not believe in political untouchability and values consensus in running the country, as he noted that his government has bestowed State honours on even the ruling party’s political rivals to acknowledge their service to the nation.

Addressing Bharatiya Janata Party (BJP) MPs at an event in New Delhi to mark the 53rd death anniversary of Deendayal Upadhyay, a party ideologue who had founded its progenitor Jana Sangh, Modi said the saffron party always puts “rashtraneeti” above “rajneeti” and gives respect to even its political rivals.

In this context, he said the current government has honoured former President and Congress stalwart Pranab Mukherjee with Bharat Ratna and noted that Padma awards were given to former Assam Chief Minister Tarun Gogoi and former Nagaland Chief Minister S.C. Jamir, both from the grand old party.

Mr. Modi noted that he had said in Parliament that a government may run with majority but the nation runs with consensus.

He also cited his government’s tributes to national icons like Subhas Chandra Bose, B.R. Ambedkar and Sardar Vallabhbhai Patel, and observed that any other dispensation would not have done it.

Upadhyay’s ideals of “antyodya” (empowering the most downtrodden) and integral humanism are the inspiration behind the government’s welfare works and the “Aatmanirbhar Bharat” (self-reliant India) programme to boost the economy, the Prime Minister said, adding that India has followed the principle of “nation first” in its external policy as well, without being influenced by any pressure.

He urged the BJP units across the country to undertake 75 works for social welfare as the country approaches its 75th year of independence.

Mr. Modi also suggested to the party MPs and other leaders to make a list of products they use in their daily lives and see if they can get rid of foreign stuff and instead, use their Indian alternatives. By suspending Q-hour, government has deprived the nation of the right to ask questions: Ghulam Nabi Azad