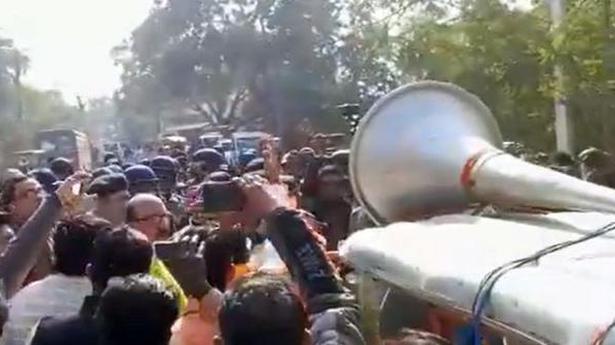 District BJP leader, however, claims that the party had intimated the administration about the route being taken for the yatra well in advance, and no objection was raised back then

The BJP on February 8 had to take an alternative route for its ‘Parivartan Yatra’ in West Bengal’s Murshidabad after the police stopped its rath from venturing into some of the district’s “sensitive pockets”, a senior police officer said.

District BJP leader Gourishankar Ghosh, however, claimed that the party had intimated the administration about the route being taken for the yatra well in advance, and no objection was raised back then.

The ‘Parivartan Yatra’ on a rath was flagged off by BJP national president J.P. Nadda from Nabadwip in Nadia district on February 6, as part of the saffron party’s outreach programme ahead of the Assembly polls. It travelled through Nakasipara before entering Murshidabad on February 7.

Members of the party, decked in saffron attire, are interacting with common people, and distributing pamphlets highlighting central government schemes and development work, as part of the yatra. An AC van, which has been converted into rath, has faces of BJP leaders painted on it.

According to the senior officer, the rath, which was on its way to Bahrampur, was “told to avoid a particular route, which has a few sensitive pockets. The vehicle was stopped as it was passing by Bharat Sevashram Sangha at Beldanga in the district”.

Mr. Ghosh, on his part, said no such request was made to him or the other the members of his party when the administration was approached for permission.

Echoing him, state BJP leader Kalyan Choubey said, “We held discussions with the police before charting the yatra route. However, we were taken by surprise when the police stopped us at Beldanga. We sat on the street there for at least three hours.” “Later, as suggested by the police, we decided to take an alternative route via National Highway-34 bypass as we wanted to steer clear of any untoward situation,” he added.

Over the next few days, four more chariots of the BJP are set to roll out in Bengal, all of which are likely to be unveiled by the party’s top leaders.

The rallies are expected to crisscross the entire State, touching all 294 constituencies.

Assembly elections in Bengal are likely to be held in April-May. Stage shows an integral part of his journey

For many a tribal student, Plus One admission is a distant dream