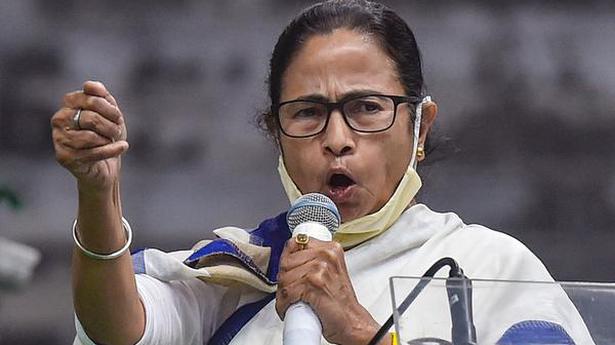 “The BJP has turned the country into a crematorium, but we will not allow the same to happen in Bengal,” says Mamata Banerjee

West Bengal Chief Minister Mamata Banerjee on February 9 alleged that the BJP-led government at the Centre was not disbursing funds under the PM-Kisan scheme to peasants in the State despite the TMC administration having sent the verified names of farmers to it.

Accusing the BJP of falsely claiming that she is denying funds to the farmers, she said that the Trinamool Congress (TMC) government in the State is giving ₹5,000 each to peasants and has also arranged for free crop insurance.

The Chief Minister on Feb. 8 informed the Assembly that out of 6 lakh applications of farmers sent by the Centre for verification for payment of monetary assistance under PM Kisan Samman Nidhi, the State government has returned 2.5 lakh names following necessary work.

The TMC chief claimed at a public rally at Kalna in Purba Barddhaman district that peasants are facing atrocities during their agitation outside Delhi against the new farm laws.

Accusing the BJP of resorting to lies about Hinduism, Ms. Banerjee said that her party does not preach division among people on the basis of religion.

“The BJP has turned the country into a crematorium, but we will not allow the same to happen in Bengal,” she said, asserting that the TMC will win the Assembly elections for the third consecutive term.

Humayun Kabir, an IPS officer who resigned from his job a few days back, joined the TMC at the rally in the presence of the party chief.

Elections to the 294-member Assembly are due in April-May.