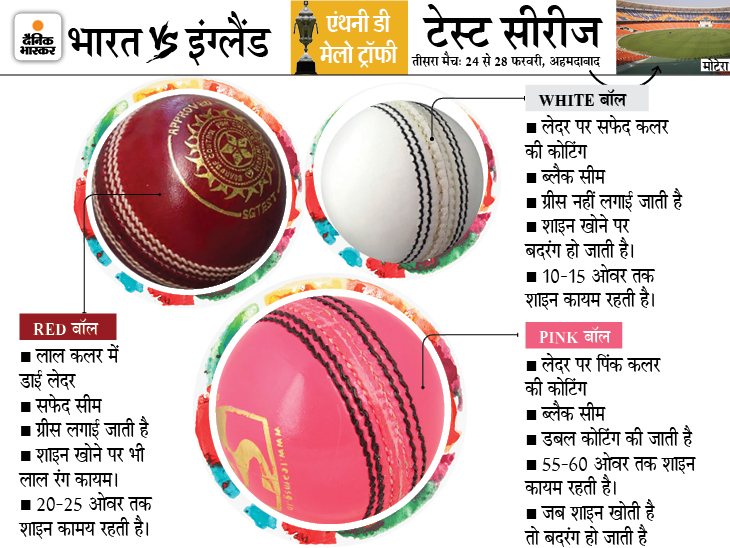 The day-night Test match between India and England starts at Motera Stadium in Ahmedabad from 24 February. This will be the overall 16th and second day-night Test match on Indian soil in the last 6 years. Pink ball is used for day-night test. Let us try to know why the test is not played at night with red or white ball and why three different colors of ball are required in different formats of cricket.

It is important for the safety of the players to see the ball well
Cricket is one of the most popular sports in the world. Millions of people play it, but playing it with a hard ball has proved dangerous at times. Some players have also lost their lives at different levels. Keeping this aspect in mind, it has always been the endeavor of the cricket administrators to ensure that the color of the ball is visible to the players.

Ever since the introduction of first class cricket, cricket has been played with the red ball. Limited over cricket was also played initially with red ball. The first four World Cups (1975, 1979, 1983 and 1987) took place with the red ball. After the start of day-night cricket, the white ball was entered. During the last few years, the use of pink ball started when the day-night tests started getting more.

The color combination of the atomosphere varies 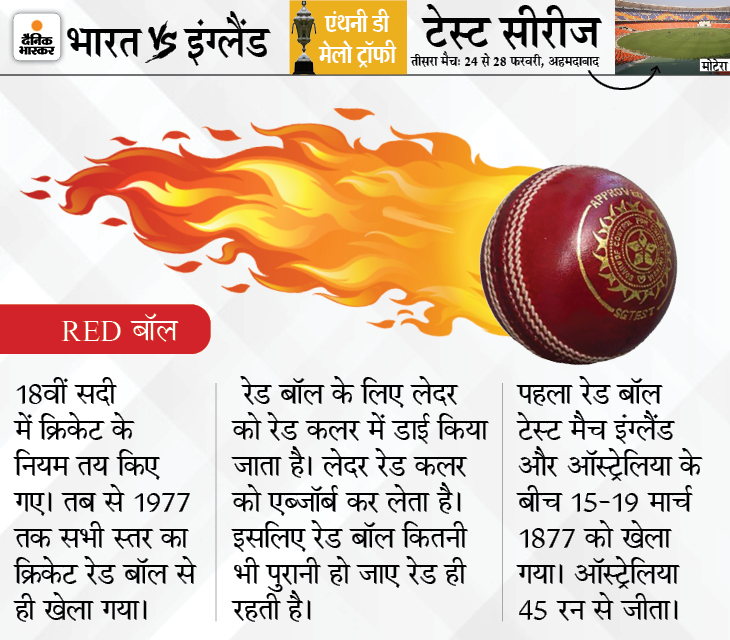 The composition of light around us also varies during the game at different times. Natural light remains light yellow till noon. At the same time, there is slight redness in the sky in the evening. The light composition changes completely after the floodlights are on. In all these situations, different colored balls are more visible to us.

Ideally, red balls are seen best during the day and white balls at night. Hence red ball is considered good for day cricket and white ball for day night cricket. This is why Red Ball is used for First Class (including Test) and List A (including One Day International) and White Ball for T20.

Then why don’t white ball have day-night test matches? 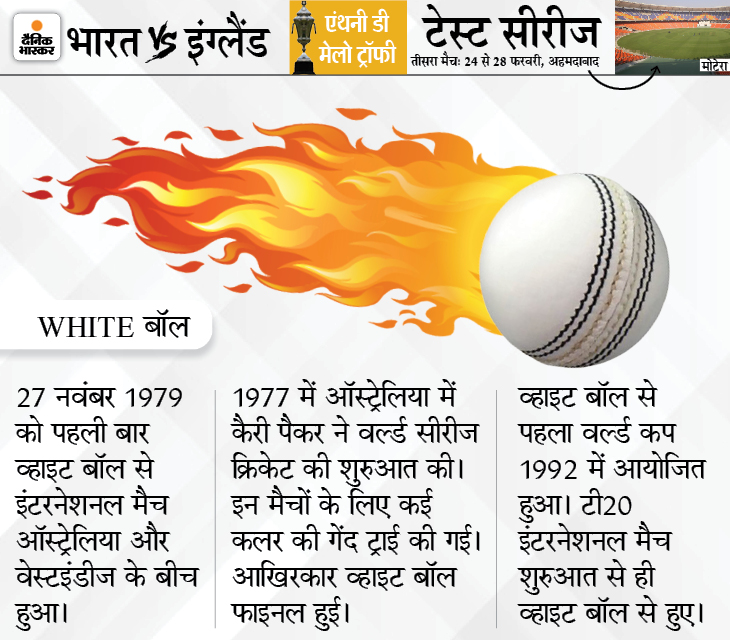 The white ball looks better in the light of the floodlight at night, but test matches are not held with the white ball. This is due to the early landing of whitewash on the white ball. The red color comes through the dye on the red ball. Leather absorbs red color. Therefore, when the ball becomes old, its color remains red.

This does not happen with the white ball. The ball is plated with a white paint coating. This coating starts descending around 30 overs. This leads to reduced visibility. In ODIs, there is no problem due to using different balls from both ends. An innings in T20 only lasts 20 overs, so there is no problem.

In contrast, a ball can be replaced only after 80 overs in a test. Therefore, playing with a white ball is not possible. Apart from this, the players’ jersey is kept white in the Test. It is difficult to see the white ball in a white jersey. White ball is not used in Test because of these two aspects.

Why Pink color was chosen, why not Orange? 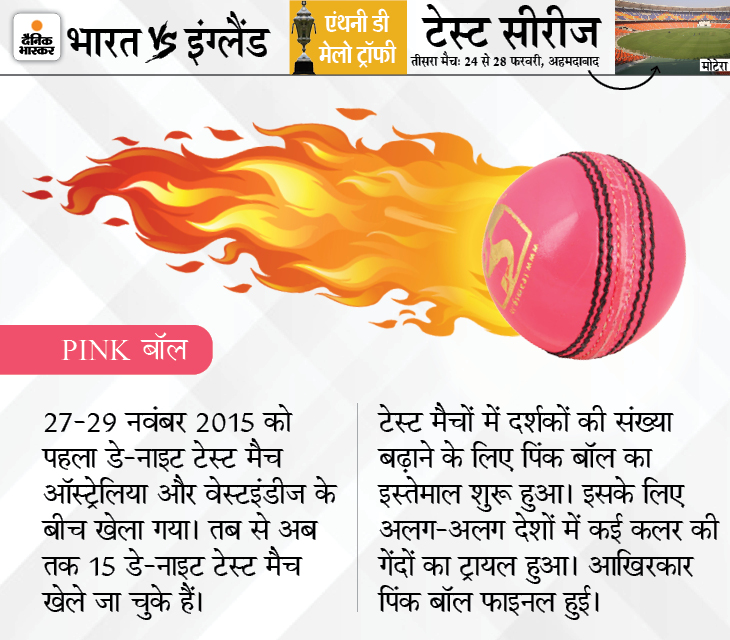 In the light of the floodlight at night, the orange ball is more visible than the pink ball, but there is a problem. Orange color is not considered good for broadcasting. Orange Ball TV viewers get blur (blurred) during the broadcast. Hence pink color was chosen instead of orange. However, pink color also cannot be dyed on leather. It is also plated through a coating.

Why can’t pink and white be dyed?
Pink and white colors are lighter than red. Therefore the leather is not able to absorb it properly. In this case, coating means coating the top layer remains the only option. Like the white ball, the pink ball does not lose color too quickly, so the ball is double coated.

Why does the pink ball swing long?
Due to the double coating, the pink ball retains shine for a long time. So it supports long-term swing bowling. Also, the grass is also left on the pitch to maintain the brightness of the pink ball. This increases the seam movement. Pink ball is more helpful for fast bowlers due to increased swing and seam movement. 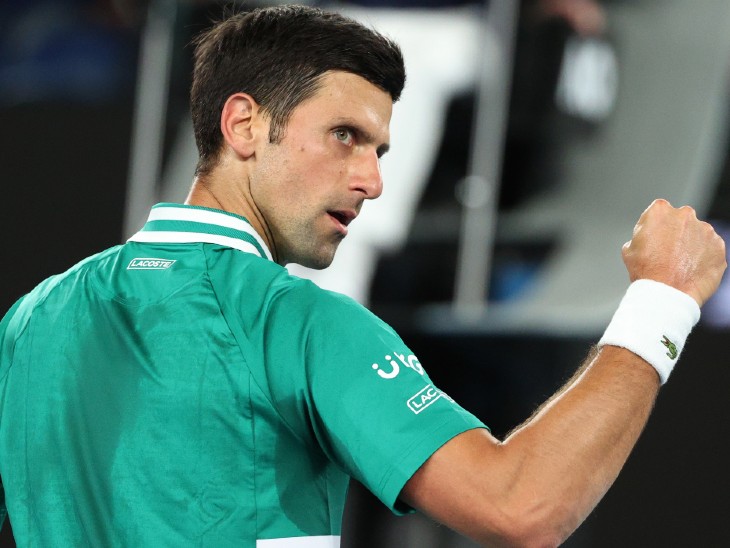 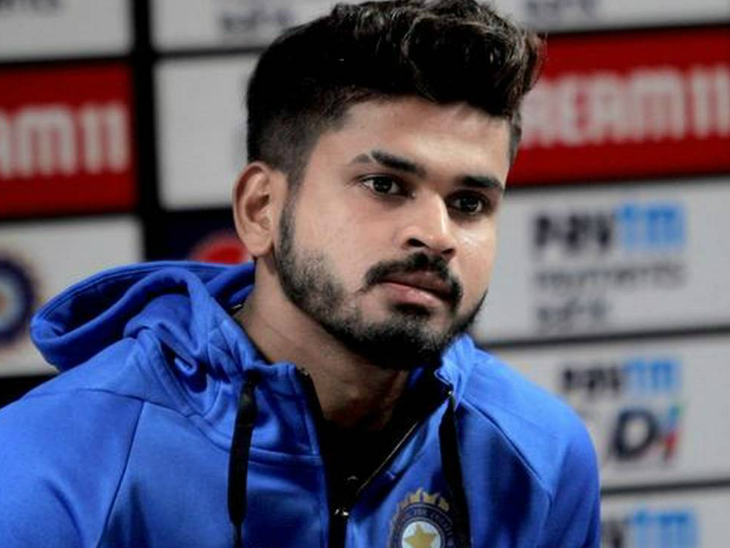 Shreyas defends the bowlers: Iyer said – the problem of bowlers getting into ODI format, the workload on them increased significantly

Bhaskar Explaner: Master Stroke sending Pant to number five; How slow was Vihari’s innings? What did India get from this match?