The Malenadu Veerashaiva Mathadheeshara Parishat, a forum of seers of the Malnad region, has come out in support of Chief Minister B.S. Yediyurappa. The forum, which held its meeting in Shivamogga on Wednesday, wanted Mr. Yediyurappa allowed to complete his term as the Chief Minister.

As many as 21 seers of the forum attended the meeting. Mallikarjun Murugharajendra Swamy, president of the parishat, addressing the media wanted to know why Mr. Yediyurappa should step down. “What reason do you want to give? Is he suffering from health issues? Have development works been stopped in his rule? He has been active every day. He has no serious health issues. Manohar Parrikar was allowed to enjoy the post till his last day, despite serious health problems”, he said.

Mr. Yediyurappa has brought in many development projects for Shivamogga. The district got medical college, irrigation projects, development of Udutadi and many more. He would bring more works if he was allowed to continue, the seer said.

Further, Mr. Yediyurappa had given importance to all sections of society in his budget. He should be allowed to complete his term and offered an honourable exit.. The seer also said any move to quit the post would hit the BJP badly. “We are supporting him because every individual of the State has been benefited by his governance in one or the other way.”

The seers of various mutts in Shivamogga district were present. 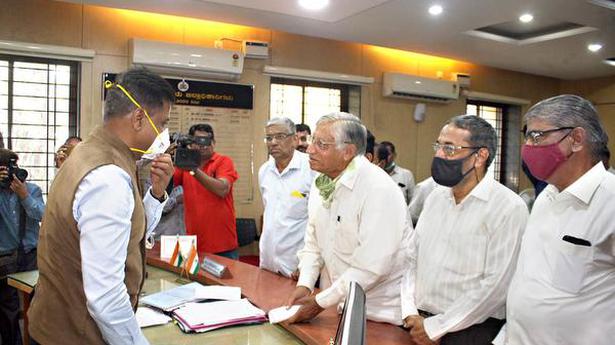