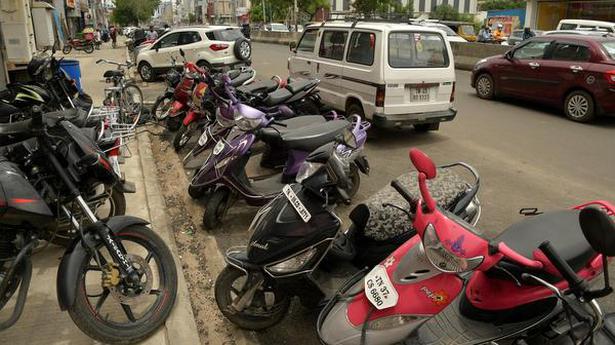 
While redevelopment of Karur Bypass Road in the city as a “model road” by Tiruchi Corporation has been largely welcomed by local residents, unrestricted parking along the stretch seems to have defeated the objective of the widening project.

Conceived under the State Government’s Infrastructure Gap Filling Fund, the project taken up at an estimated cost of ₹8 crore is still under way.

However, redevelopment of the stretch from Salai Road intersection up to the road over bridge has been completed.

The stretch has been substantially widened and walkways have been laid. A road median has also been constructed to regulate the traffic flow.

The project was executed in the wake of persistent demand from residents for development of the road, which, in recent years, has emerged one of the busiest in the city as it connects Salai Road and Tiruchi-Karur Highway on one direction and leads to Chathram Bus Stand and Srirangam on the other.

The road has also emerged the main entry route for vehicles coming from the northern and western districts of the State.

Mofussil buses and other vehicles from the districts enter the city via this road to take Anna Nagar Link Road towards Central Bus Stand and beyond. Several motorists prefer to take the road to reach Thillai Nagar from Chathram Bus Stand instead of going via the heavily congested Main Guard Gate area.

The road has also emerged a commercial hub as retail showrooms, hotels and eateries have come up along the road.

Many of these establishments do not have dedicated parking space, forcing visitors to park their vehicles on the road.

Frequent traffic pile-ups have been a major irritant for motorists, leading to calls for widening, removal of encroachments and regulation of parking.

The District Road Safety Council too called for widening and construction of a median given the heavy traffic that it caters to.

However, with a major portion of the work having been completed, scores of cars and two-wheelers are now seen parked along the road, nullifying the benefits of the widening project.

“Now, perpendicular parking is followed on the road and cars seem to occupy almost three-fourths of the carriageways on both sides,” observed R. Gopalakrishnan, a regular commuter.

With West Boulevard Road also being redeveloped on similar lines under the Smart City Mission, residents hope that the city police will regulate parking of vehicles on arterial roads.

M. Sekaran, Member, District Road Safety Council, emphasises that parking of vehicles should not be allowed on main thorough fares and the rule should be strictly enforced in the city.

“The onus of providing parking space for visitors and others is on the commercial establishments,” he said.

4 held for attack on meat merchant