State Labour Minister Gummanur Jayaram said the government would come to the rescue of the workers employed in the garments manufacturing units, near Hindupur, in the district and termed it unfortunate that minimum wages were not being paid to them during and post pandemic.

After participating in the conclusion of the C, Mr. Jayaram told The Hindu on Monday that the State government had not constituted the Minimum Wages Advisory Board and the Chairman was yet to he appointed. When his attention was drawn to the 4,000 women agitating for the past six days seeking minimum wages, and if the State government would intervene in the issue, the Minister said: “It has been a difficult time for the garment manufacturing units due to dwindling demand from European markets, but the State government had sent its Joint Commissioner of Labour to deal with the situation.”

The India Designs Garment Company and Nisha Designs Garments Company workers in the Parigi mandal close to Hindupur, have been agitating to enhance the minimum wages by ₹5,000, but during tripartite talks on November 14, the management representatives had said that they were not able to pay for next three months.

Meanwhile, the Centre of Indian Trade Unions 9CITU) on Monday submitted a memorandum to the Labour Commissioner and other officials in the government seeking its intervention in the issue. 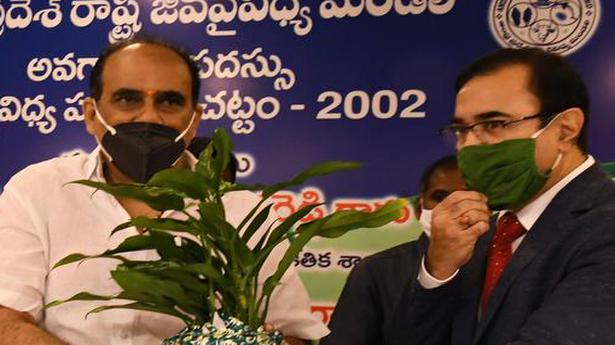 Medicinal plants to be given to households across State