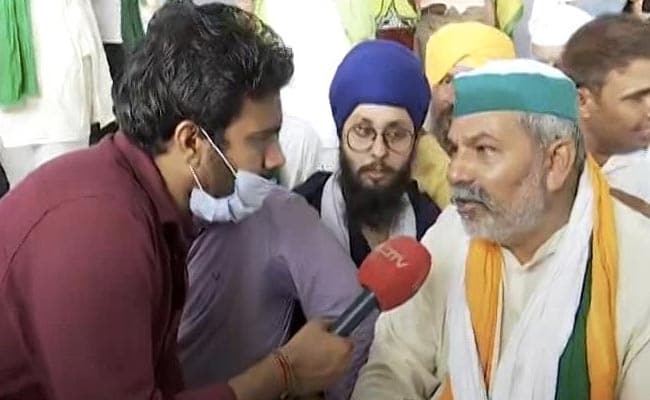 Farmers protesting against the Centre’s farm laws will “campaign in the name of the Prime Minister” because that’s what the BJP does too, farmer leader Rakesh Tikait said in a tongue-in-cheek message today, making it clear that the nature of their “publicity” will be very different.

“We are giving publicity to the PM only,” Mr Tikait told NDTV in an exclusive interview today. Then he went on to add: “He (Prime Minister Narendra Modi) is selling everything. We will tell people what all is being sold off. There will be publicity of the PM. Electricity, water, etc are being sold off. Is it wrong to tell people these things?”

The farmers have declared that they will campaign against the BJP in next year’s state elections in Uttar Pradesh. They even dubbed today’s mega-meeting in Muzaffarnagar “Mission Uttar Pradesh-Uttarakhand”, indicating their plans to focus on the two BJP-ruled states where elections will be held next year.

After the farmers’ protest meet, Mr Tikait said such farmers’ meetings will be held in other districts of Uttar Pradesh as well.

“The second PMO (Prime Minister’s Office) is in Varanasi (PM Modi’s Lok Sabha seat). Panchayats will be held there as well as in Lucknow,” Mr Tikait told NDTV.

Asked if a maha-panchayat will be held in Chief Minister Yogi Adityanath’s hometown Gorakhpur, he said: “Woh kisan ka sheher, Yogi ji ka toh mandir hai (That city belongs to farmers. Yogi-ji only has the temple)”. Before becoming the Chief Minister, Yogi Adityanath ran the famous Shiva temple which gave the town its name.

The choice of the venue for the meeting is also significant. Muzaffarnagar as the site of massive violence eight years ago, in which around 60 people – most of them Muslims – died.

Asked if the Hindu-Muslim divide is over in Muzaffarnagar, Mr Tikait said, “All that is over now… The farmers’ protest has bridged that gap… This is Mohabbatnagar (city of love). A start has been made”.
The farmers have decided to continue with such protests to every village in the state.

The Samyukt Kisan Morcha — the umbrella body of 40 farmer unions spearheading the farmers” agitation – has said the “mahapanchayat” will prove that the agitation has the support of “all castes, religions, states, classes, small traders and all sections of the society”.

Jyotiraditya Scindia Gets Civil Aviation, Once Headed By His Father

Days After Border Violence, Assam Advises People Not To Travel To Mizoram