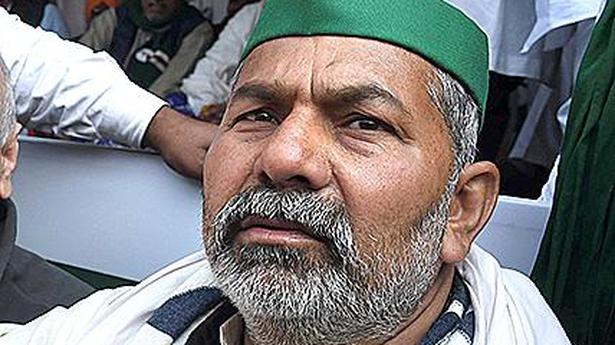 ‘Farmers respect the offer of Prime Minister for talks, but they should not be held under any pressure’

The Bharatiya Kisan Union (BKU) leader Rakesh Tikait said on Sunday that farmers would not let “grains become products to be stored in the treasury”.

“Bhojan ko dibbaband karne ka prayas hai. The farm laws would help corporates to make food a ready to eat commodity. They will make profits but won’t share it with the farmers. Had that been the intent, the government would have made law on guaranteeing the MSP by now,” Mr. Tikait said.

On the Delhi police notice that asked Mr. Tikait to answer on the Republic Day violence in the Capital, Dharmendra Malik, BKU media-incharge, said they were in talks with lawyers and would respond accordingly.

Meanwhile, as the number of farmers continued to swell at the Ghazipur border, Delhi police heightened security at the border on Sunday. Multiple layers of concrete barricades and concertina wires have been added.

BKU sources said the administration might have feared their movement towards Delhi on Budget day. “”As already decided, we have no such plans,” said Rajvir Singh, Vice President, BKU.

The support for BKU is now not only pouring from western Uttar Pradesh but farmers from Bundelkhand and eastern parts of the State are also trickling in.

‘My concern is MSP’

Responding to PM’s appreciation of strawberry cultivation in Jhansi in Mann Ki Baat, Lalloo’ Ram, a farmer from Jalaun, said he hadn’t heard of strawberry. “It may be a good thing, but my concern is that I get the MSP for dalhan (pulses). Did he say something about it,” he asked.