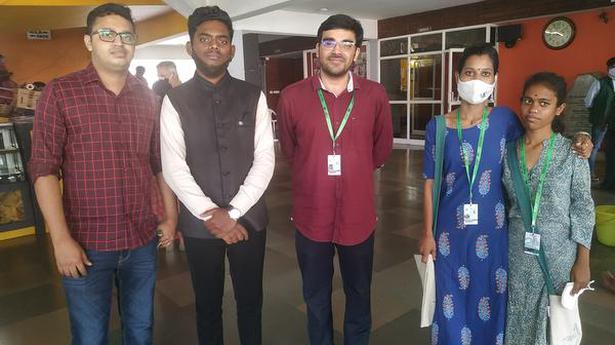 Life changes irrevocably for 17-year-old Kosa, a tribal youth from Chhattisgarh, when he gets picked up by the police, mistaken for a Maoist. Through the story of this youth, inspired from a real incident, filmmaker Mohit Priyadarshi tells the larger story of Adivasis in the country’s heartland, who are caught in the crossfire between the establishment and the corporates on one side and the Maoists on the other.

Mohit, a native of Bihar, thought of his debut feature Kosa during his days in the Film and Television Institute of India (FTII), after hearing about the incident of the wrongful arrest of a boy. It was perhaps a coincidence that one of the headlines in Indian newspapers, on the day the movie was screened at the International Film Festival of Kerala (IFFK), was on a forensic report that seemed to say that evidence was remotely planted on the laptops of intellectuals and academicians accused in the Bhima Koregaon case.

“The situation has been like this for the Adivasis for a long time, with their spaces being invaded and them being arrested on fabricated charges. Now, it has entered a more bizarre stage with the same method coming to the cities and to academic places. Branding everyone as ‘urban naxals’ is a method of clamping down on dissent. The whole idea is to create a climate of fear. When people are jailed for ten years without charge, they are silenced and nobody else would want to do even the basic things like working on the ground and helping and mobilising people,” says Mohit, in an interview to The Hindu.

Mohit and his crew, including two Keralites — editor Davis P. Manuel and Ananthakrishnan, one of the cinematographers — began the work on the ground in 2017. Since he wanted raw performances, he looked for non-professional actors. Kunal Bhange, who plays Kosa, was identified from a theatre group while Kareena Jagat and Mona Vaghmare, both from the Adivasi community in these regions, were also picked from other small-time theatre groups.

“I started with my own money and then requested people I know to pitch in, by showing them a short video on what the film was all about. I did not go to any producer because I thought no one should curtail my freedom. Our only concern was to just tell the truth, rather than releasing it,” he says.

The film hints at the basic issue behind the conflict in the regions, when it touches upon the corporate plans for specific pieces of land, and the methods they employ to get the people at the various levels of the establishment on their side. The character of a small-town journalist, also inspired from a real-life character, shows the struggles of reporters in the hinterland, with great threat to their own lives, to get some of these stories out on paper.

New cases dip to 797 in capital