Motorbike-borne duo hit another bike on purpose, recorded and posted it on social media

The quest to become popular by making a troll video has landed six youths in trouble.

According to the police, the youths purposely created a motorbike accident a couple of weeks ago at Thrikkunnappuzha, to make the troll video. The Thrikkunnappuzha police said they had registered cases against two members of the gang for deliberately rear-ending a motorcycle, on which two persons were travelling, for creating the video.

The police said Sujeesh Sukhu, 22, of Mahadevikadu and Akash Sajikumar, 20, of Karthikappally were booked under Sections 279 (rash driving or riding on a public way) of the Indian Penal Code and 183(1) (whoever drives a motor vehicle in contravention of the speed limits referred to in section 112) and 184 (driving dangerously) of the Motor Vehicles Act.

Officials said the youths hit the road on four motorcycles. One motorbike hit another two-wheeler ridden by Althaf, a native of Pallana. Althaf and the elderly pillion rider, however, did not fall from the two-wheeler. After the accident, the youths apologised to them. “The episode, including the accident and the apology, was recorded. They later posted the video, including its making, on social media. Local people who watched the video alerted the Motor Vehicles Department,” said an official.

The video posted by the youths shows the accident accompanied by dialogue “Not just me, they are also there,” from the Malayalam film In Harihar Nagar. In the film, Appukkuttan, a character played by Jagadeesh, says the dialogue after he intentionally knocks down an elderly person.

The Motor Vehicles Department seized the motorcycles and initiated steps to suspend their licences for six months. One member of the team was recently booked by the Haripad police after his motorbike hit a 38-year-old woman near Nangiarkulangara Junction on January 27. Jyothish who rode the bike did not stop after the accident. The woman later died in a hospital from the injuries sustained in the accident. 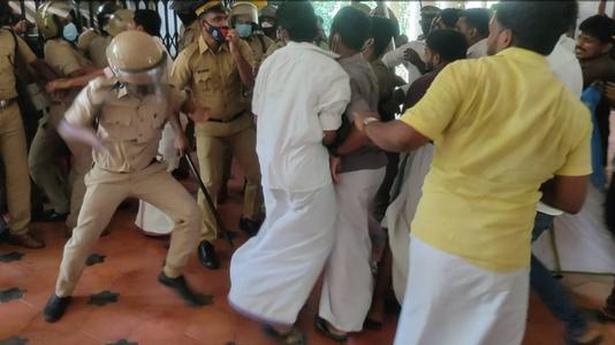